With the explosion of cloud computing infrastructures, it remains unclear how many organizations and businesses are actually taking advantage of this new platform. I’ve been asking (as well as asked) that question regularly. The large providers aren’t going out of their way to satisfy the thirst of industry analysts and market researchers alike – so I decided to take a more practical approach and dig up the numbers for myself.

The report which follows has been collected and analyzed using proprietary tools based on public data. This post is a first in a series of regular posts which will share findings with the cloud computing community. Don’t forget to subscribe to our feed so that you don’t miss future updates!

The input dataset was QuantCast‘s top site index. We took the top 500,000 sites listed and ran them through our scanning tools to build an index of the websites which are hosted on Amazon EC2. So, how many of the world’s top websites are placing their gateway to the world and, in many cases, their entire business – in the hands of Amazon’s cloud? 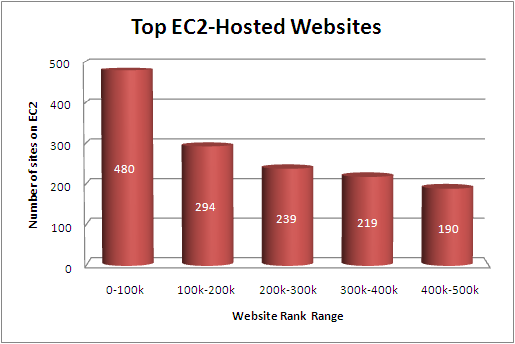 It’s easy to see that the larger websites are leading the pack and moving to Amazon first. The 0-100k group contains over twice as many websites on Amazon EC2 than the 400k-500k group. This trend is further emphasized if we drill down inside the first group. Our data shows 168 sites on Amazon with ranks between 0-25k, compared to 86 with ranks between 75k-100k. It would appear that usage of EC2 increases exponentially with rank.

This result makes a lot of sense as it’s the larger sites that are likely to benefit from what cloud computing has to offer – elasticity, the economy of pay-per-use and simply sheer scale.

In next month’s report, we will include a comparative analysis that will show how use of Amazon’s compute cloud is growing. We can already hint, based on some internal numbers we have collected in the past, that this growth is dramatic.

Our report does not purport to cover all cloud users nor does it encompass all users of Amazon EC2. Back-end and back-office systems, research servers and domains whose primary website (www.domain.com) are not on EC2 – are not covered. Additionally, our decision to focus on Amazon means sites hosted on other cloud providers are currently not included.

Nonetheless, these statistics are providing us us a fascinating glimpse into adoption of the cloud. We hope you find them as interesting as we did. Make sure to tune in next month to see the low-down on Amazon EC2 usage.