It’s that time of month again, which means a new State of the Cloud post is upon us! For new readers, State of the Cloud is a regular report on the adoption of cloud infrastructures, comparing the share held by each provider. The first post in the series describes methodology, data sets and caveats.

During my recent presentation at the IGT, I was asked whether there is any evidence to back up the belief that newcomers are embracing cloud infrastructure more than established companies. Before our regular monthly numbers, let’s take a shot at that question. The technique we’ll use is simple: take registration dates for domains in the State of the Cloud data set, and compare those of cloud-hosted sites to those of the general population. (The analysis was performed with a random sampling of each group.) 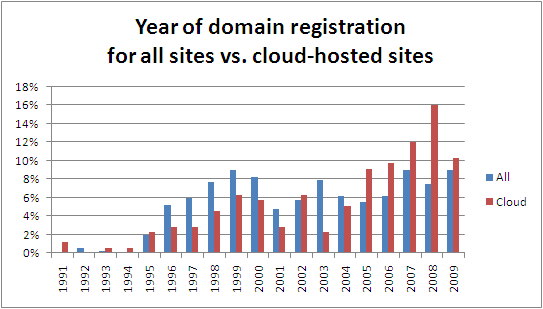 The difference is easily recognizable to the naked eye. While both groups have representation across the board, cloud-hosted sites tend to be much newer. Calculating the median of each group, the overall median year of registration in our data set is 2003, while that for cloud-hosted sites is 2005. These findings won’t come as news to anyone, but it’s great to let the numbers tell the story of the cloud’s early adopters.

And now for our regular programming – 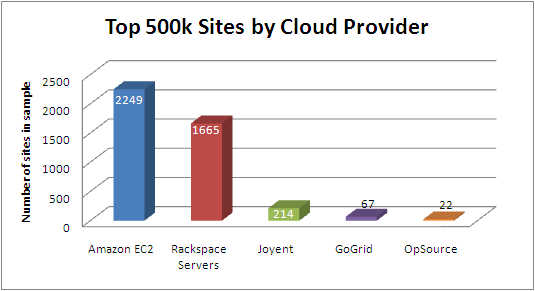 Amazon leaps ahead, this month attaining a 35% lead on runner up Rackspace Cloud Servers. I’d like to note that due to an update of Quantcast’s top million sites (the input data set), this month’s results may be “bumpier” than usual. In the grand scheme of things, these regular updates will contribute to greater accuracy. 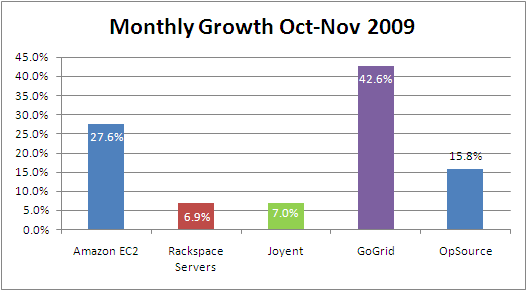 GoGrid got the biggest boost this month, even though in absolute numbers there is a lot of ground to be covered. In the race for pole position, Amazon greatly outpaced Rackspace. We might infer that that the updated data set’s positive effect on GoGrid and Amazon EC2 reflects well on them: it is an indication of their true strength amongst the top of the crop of Internet sites, as compared to the other providers. 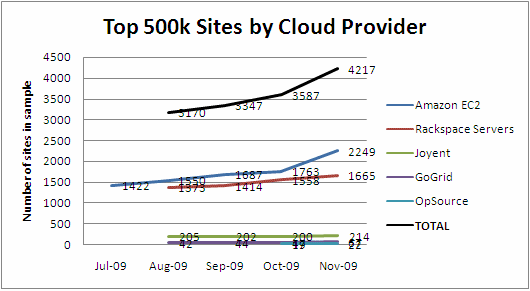 Regardless of the individual providers’ standings, the overall growth of the cloud providers surveyed over the past 3 months (as indicated by the black line) is an incredible 33% – from 3170 hits in our data set 3 months ago to 4217 this month.