Welcome to the eighth update for the State of the Cloud series. In case you are just joining – this monthly report measures the adoption of leading cloud providers amongst public-facing websites. The data set is based on the top 500,000 sites as measured by QuantCast. As always I’d like to point out the caveats of this method which were laid out in the first post in the series.

This month UK-based FlexiScale joins the report. FlexiScale has been on the radar for a while, but due to the US-oriented nature of QuantCast’s data it was so under-represented that it was as invisible. Since then, FlexiScale’s footprint has expanded enough so as to make it reasonable to include it the report. It’s worth mentioning that FlexiScale is probably still under-represented, so its standings should be taken with a pinch of salt.

This month I’m plotting the numbers both in the usual bar chart and also in pie chart format. The pie-chart really visualizes that there are two leagues here. it’s increasingly difficult to see anyone from the minor league crossing over to the major league, which holds a whopping 93% of the total cloud-hosted sites found. Amazon EC2 hosts a shade under 50% of these sites while Rackspace Cloud Servers hosts 43%. Joyent, GoGrid, OpSource and FlexiScale together comprise just 7% of all cloud-hosted sites found.

I should remind readers that these percentages are not of the full 500,000 sites surveyed. In fact, all the cloud providers together still host a meager 1% of the sample. 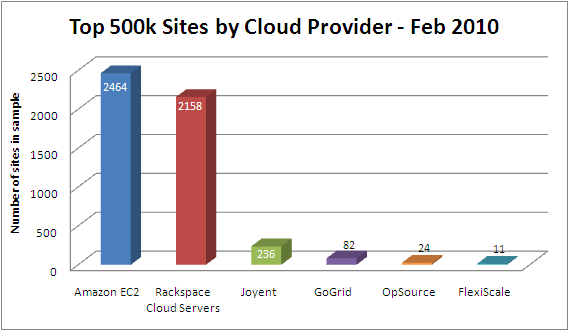 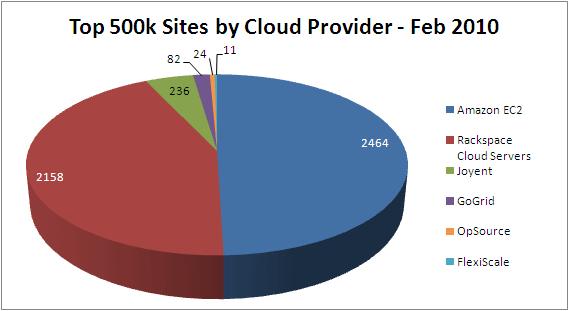 Here are the results as observed over the past months: 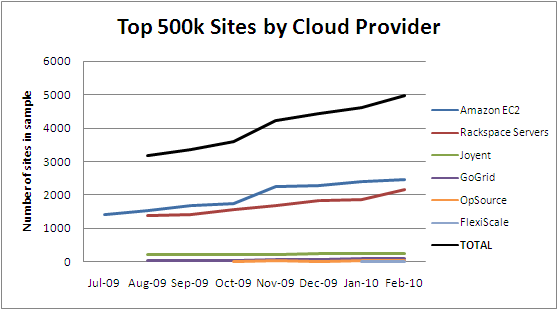 Tune in next month for further updates!