Welcome to the one-year anniversary of State of the Cloud! It’s been an exciting year for the cloud computing industry, which is maturing from a fledgling phenomenon into a massive shakeup of IT. While we haven’t quite crossed the chasm, we’re definitely looking across it and preparing for the leap into the mainstream.

In State of the Cloud August 2009, I noted that Amazon EC2 (which I’d covered in a previous one-off post) had grown 9% in just a month, hinting at 181% CAGR. One year later, let’s see if EC2 lives up to these expectations. 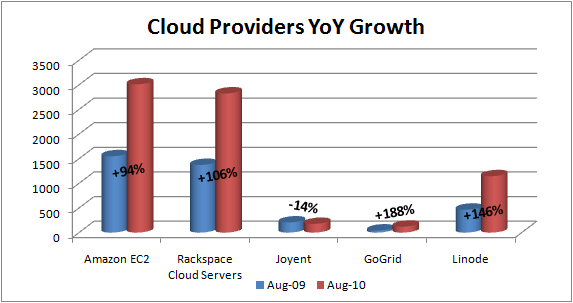 While EC2′s overall growth in our survey hasn’t lived up to 181%, there is hardly any reason for disappointment. With the exception of Joyent, the evidence shows that all of the providers tracked have seen incredible growth over the past year. The two leaders have doubled their share and continue their neck-to-neck race (more on that below). The smaller GoGrid and Linode have more than doubled in size, however their is still a large gap between them and the major league duo.

If we tally up all the numbers, we find that overall the cloud has doubled in size over the past year: back in August 2009, State of the Cloud found 3,635 websites on cloud providers. This month that number is 7,278. That’s 100.2% growth.

Let’s turn back to this month. The race continues, but takes a surprising twist: 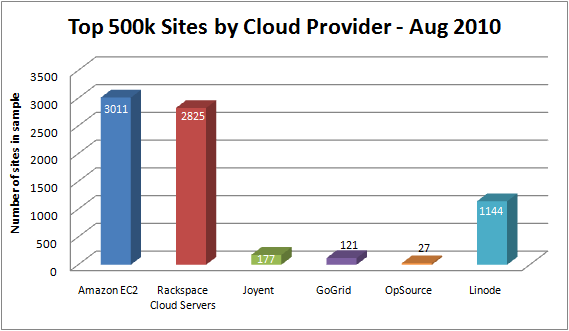 For the first time since this survey began, Amazon EC2 has dropped. Last month we counted 3,043 sites on EC2. This month, that figure is 3,011 – negative growth of 1.2%. Granted, that’s a pretty small figure and could well be a statistical anomaly; nonetheless it will no doubt be a concern to Amazon, what with Rackspace breathing down its neck.

A Word of Appreciation

It’s been a fantastic year. I’d like to take this opportunity to extend my thanks to all of you out there in the cloud industry who have pitched in, to the providers who readily cooperate (and to those who don’t…) – and above all to you, my loyal readers, whose feedback and encouragement are a real driving force. Where will we be in August 2011? Let’s wait and find out.