In this month’s report – EC2 grows by 9%; Rackspace makes an impact

Last month we launched our series of reports on usage of cloud computing infrastructures. Today we’ll follow up to see what has changed in the month that passed. We’re also delighted to expand our coverage into additional providers, providing a wider perspective of the cloud’s adoption.

To see our methodology and data sets, please refer to the first post in the series.

Of the 500k sites analyzed, these are the results for the five cloud providers we currently track: 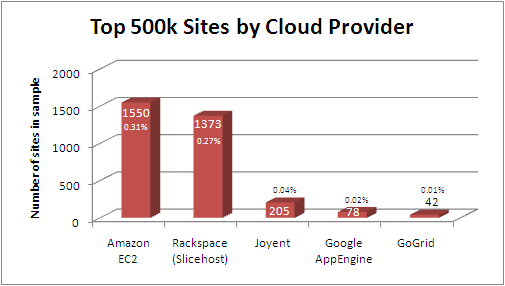 The big surprise here is Rackspace, which seems to be just a step behind Amazon. We should recall that Rackspace’s Cloud Servers (Cloud Sites was not included) is actually Slicehost, an established VPS provider Rackspace acquired in 2008. SliceHost’s transition into a true cloud provider is still in process. For example, we cannot tell how many of the customers we’re seeing are paying per hour as opposed to paying monthly as they could on any other VPS. To highlight this, imagine GoDaddy rebranded their VPS/hosting services as “cloud” – they’d blow the others right out of the water (GoDaddy comprises 6.2% of our sample – almost 20 times the size of Amazon EC2!).

We were curious to see the impact of Google AppEngine, despite the fact that it is a PaaS not IaaS cloud. Despite all the hype, AppEngine has a mere 78 appearances in the top 500k sites.

As promised, we’d like to compare Amazon EC2′s standings since last month. 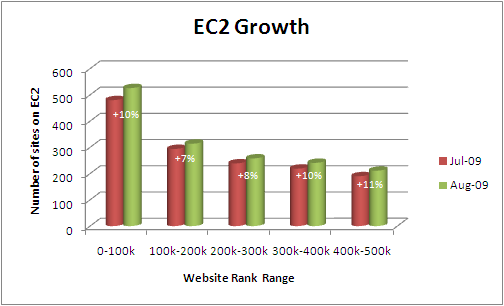 Overall, Amazon EC2 grew by a whopping 9% since last month. This is equivalent to 181% annual growth – truly incredible. Drilling down into the groups, we can see that it’s the first group and the last two groups that are growing fastest. The mid-range seems to be slower at adopting EC2.

Looking deeper into our data, we found 178 sites that migrated into EC2 this month but also 50 that left EC2. Newcomers to EC2 include GossipGirls.com, tech review site WebUpon and Central Connecticut State University. Departees from EC2 include National-Louis University as well as microblogging site Identi.ca (which, we found, switched over to EC2′s competitor Joyent).