In previous posts, we’ve gone to great lengths to make educated guesses regarding Amazon EC2 usage. Amazon, however, are not alone in the cloud space. It makes sense that we do the same for other providers to get an idea of their comparative levels of usage.

In today’s post, we’ll be discussing such an analysis of GoGrid.

GoGrid’s technology seems to make the process almost trivial – the server ID that is assigned to each and every server provisioned appears to be a straightforward serial number. Hence, this time we need not find patterns or XOR bytes, and can instead get down to business. As always, I will warn that the numbers are circumstantial and only GoGrid knows if they are the real thing. 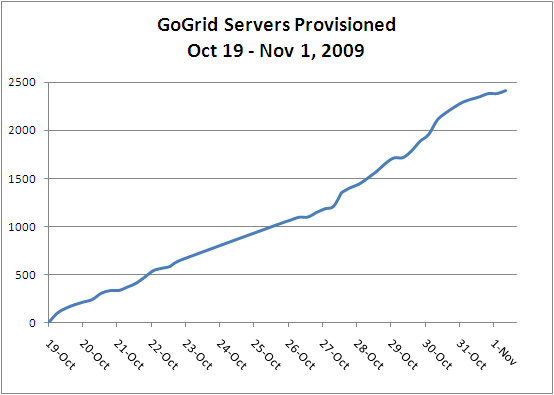 In total, during a time span of just over 13 days this research witnessed 2413 servers provisioned on GoGrid. On average, that comes to approximately 181 servers launched per day.

How does this compare to Amazon EC2? We calculated 50,000 servers/day for EC2, so the difference is significant. To put it another way – by this count, if GoGrid was the size of the Texas then EC2 would be the Pacific Ocean. Let’s try to dig a little deeper though: this measurement is more a reflection of a provider’s level of elasticity than of its absolute size. With a thriving ecosystem of tools and services such as Elastic Load Balancing and Elastic MapReduce it’s not surprising to find the use of EC2 servers is more dynamic.

On a personal note, I must say I was put off by the time it takes to launch a server on GoGrid (sometimes up to 8 minutes) as compared to what I was used to from EC2. For me, that means that if I need a quick server just to run something for a minute or two there would be no question.

Coming up next time – a similar analysis of Rackspace Cloud Servers.