Two weeks ago, Amazon announced the launch of a new N. California region, us-west-1. This is now the third region in Amazon’s portfolio, following the N. Virginia-based us-east-1 region and the Ireland-based eu-west-1. I got curious to see how fast the new region was being adopted. Luckily, with the Anatomy of an Amazon EC2 Resource ID formula at hand, we can zone in on this data this quite easily.

First, a plot of the instance counts for each region rising over the course of the day and a half sampled. 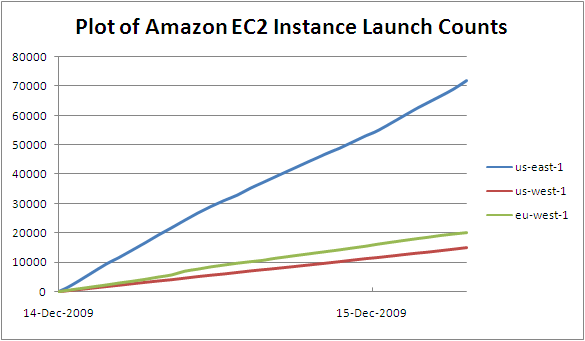 Next, a more direct comparison of the count of instances launched per day. 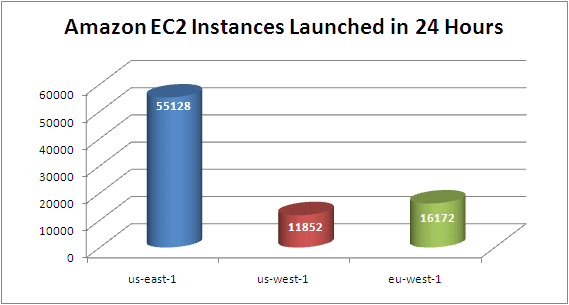 It will be interesting to see when (in my opinion it’s “when” not “if”) us-west-1 surpasses eu-west-1. It will probably not take too long. What is more intriguing is to try and guess the relative sizes, say, 1 year from now. Will us-east-1 retain its lead? While it enjoys its status as the default for AWS operations, the new region will definitely put up a fight due to its proximity to the California-centered tech industry.

One segment, applications with Salesforce integration, were up to now severely limited due to Salesforce’s datacenter being located in California and Amazon’s in Virginia. Many chose simply not to go for AWS. The new region now provides this segment with low-latency communications between EC2 and Salesforce. This segment alone may turn out to be a significant factor in the growth of us-west-1.

I’ll continue to follow from time to time. AWS are planning some new Asia regions in 2010, first Singapore and then Japan, so there will definitely be lots of data to keep us busy!