After a brief intermission, we’re back this month with an action-packed State of the Cloud report. In this month’s analysis of the top cloud providers we’ll be debuting a newcomer into the charts which makes quite an entrance. We’ll also run the analysis with an alternative data set and see if it confirms or refutes our findings.

Here are the results for this month. Welcome Linode. 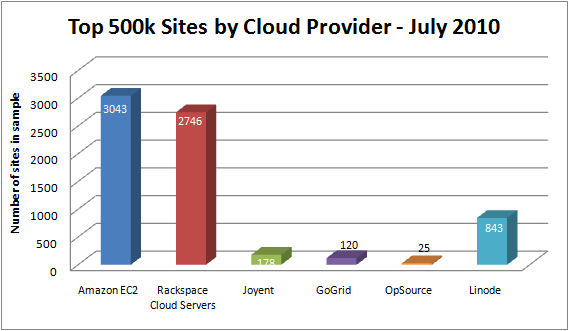 The top pair continue their steady march forward with 13% and 19% growth for Amazon EC2 and Rackspace Cloud Servers respectively, as compared to the last report two months ago. Amazon EC2 is the first of our contenders to smash the 3000-site barrier.

Linode is this month’s surprise, jumping straight into third place. I was deliberating whether Linode should be included in the report. Following some lively discussions on Twitter, the consensus was that Linode looks like a duck and walks like a duck, even if it doesn’t bother quacking. (This, as opposed to some providers that work hard to market themselves cloud while they don’t really seem to be.)

Linode offer a rich feature set and have an outstanding reputation among their customer community. The last time I saw this picture it was Slicehost, who ended up being acquired by Rackspace to jumpstart their Cloud Servers offering. What does the future hold for Linode? 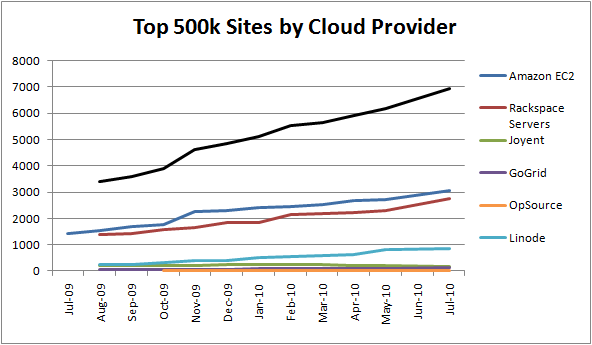 Uncovering Linode’s footprint in the historical data collected, we witness remarkable growth. Linode has grown by 270% over the past 11 months, more than any other of the providers tracked.

Last month we skipped a report due to a bug in the top site list published by Quantcast, which serves as the input for this research. This prompted me to consider other data sets that could also be used. So what would our results be like if we used another well-known source of top site rankings? I chose to take Alexa, a well-known source, for a spin and see what happens. Here’s what I found –

I was pleased to find the results do not differ greatly between the different sets. The overall rankings are preserved although some providers do exhibit some variation (particularly Rackspace, which loses over 20% when we use Alexa). Even if it is tempting to switch data sets, continuity is of grave importance for research like this one. The findings above do confirm that the standings are in the same ballpark even when viewed through a different lense. Hence I am happy to continue using Quantcast (well, unless last month’s issues pop up again!).

Next month marks a year since the first State of the Cloud. This milestone will serve as an opportunity to look back and see what progress and changes we’ve seen over the past year – as well as to take a guess at what the future may hold for this industry.